I feel most comfortable at the edge of institutions. On the outskirts, I can remain free of the interpersonal drama and bureaucracy that so often exist within institutional structures, but I can still benefit from the things that these structures offer: education, networking, employment, and other opportunities. The edge is a comfortable place to be.

Locating myself at this margin has worked for a long time, but is now being challenged. Monks are ordained by institutions. Scholars receive their degrees, funding, and employment from institutions. Seeing as I am heading in both these directions, it seems that I am on a necessary collision course. 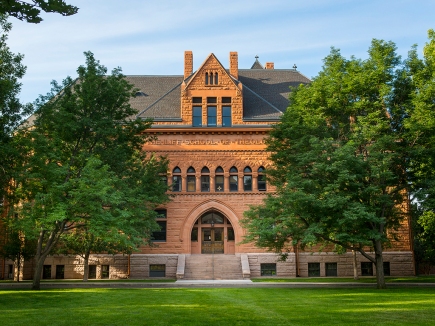 Iliff School of Theology, an institution on whose margins I hang out

I don’t like being told what to do. Organized bodies specialize in rules, charters, guidelines, protocols, mission statements, and ethical standards. This all feels rather stuffy and claustrophobic to me. I like to wander freely, think and do what I want, have flexibility, be independent. At least, this is how I’d largely led my life until a few years ago.

Marriage changed things for me. My marriage vows were the first vows I had ever taken. Upon speaking them, I committed myself to something bigger than me, something that spread out, not only to my partner, but even further than the two of us. This process of expansion continued when I received the Zen Bodhisattva precepts, which are vows for living, being, and doing.

I now feel myself being drawn into the institutions I had always avoided. My scholarly and monkish tendencies are one force. My vows are another. And yet another force is our current political climate. I feel compelled to act and be involved when I witness the kind of widespread suffering I see around me today. Hanging out on the edge no longer feels right. So I am gingerly dipping my toe into the institutional sea.

I have started this process by becoming more involved in my temple and at my university. I received training in Sustained Dialogue a few weeks back, which is a model of dialogue that aims to build relationships, be changed by what you hear, and work toward action in the community. Through this training, I hope to help people and groups in conflict come together, understand one another, and move toward change, both on the University of Denver campus and in the greater Denver area.

In what ways are you getting more involved? Or not? And why?