This is part of the ongoing Scholar Monks series, which explores the lives and works of people who have chosen to further knowledge while grounded in practice.

While writing about Hildegard of Bingen, I have the rare pleasure of listening to some of the music she composed over 800 years ago. I’ve included some here for you to enjoy while you read (1):

Hildegard was a 12th century Benedictine nun based near Bingen, a town on the Rhein River in modern-day west-central Germany (2). She was sickly from a young age and was given to the church by her family at age 8. Hildegard grew up living at the church of Saint Disibod under the tutelage of of a female religious practitioner until she was ordained and later came to lead a community of women there.

Although Hildegard had been experiencing divine visions since she was a child, she had kept them to herself (3). That is, until she received a vision at age 40 in which she was commanded to write and share her knowledge and experiences. Once she did, a monk sent her work to the Pope for approval and she got the papal stamp of divine authenticity.

From then on, Hildegard’s popularity and influence increased. She founded two abbeys, to the ire of male monks at Saint Disibod, and supervised both. She wrote extensively, including theological treatises, poems, texts on medicine and the body, sermons, and letters. Her letters were sent to many in power – kings, abbots, and bishops – directing them in how to live upright lives. She also traveled throughout the region to counsel and guide religious and political leaders. The nuns practicing under her recorded Hildegard’s visions in writing, art and music and a surprising amount of this work survives to this day. Hildegard may be best known for her musical compositions, which include over 70 chants, a musical play, and her Symphony of the Harmony of Celestial Revelations. 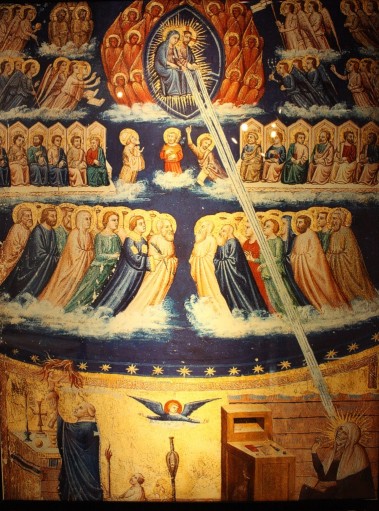 A depiction of a vision of Hildegard. Note her in the lower right-hand corner receiving divine inspiration. Photo by Bob Sessions (5)

I think there are several things we can glean as scholar monks from Hildegard’s life. First, she did not choose the ordained life. Her family gave her away, and long before that she was already experiencing divine visions. The life chose her. This is a common story among spiritual leaders and those with vocations (I think of Augustine being kidnapped and made bishop!), but perhaps a less common narrative among scholars.

Second, she bucked tradition. She did not allow the constraints of the time on her gender keep her from influencing many lives, including those of people in power. Hildegard used the authority granted her through her divine inspiration to push the boundaries of her time – socially, politically, and musically. And she did this from a spiritual base, looking to benefit others, not to further her own position.

Finally, Hildegard’s expression of her life work was not limited to any particular medium. Writing, music, art, consultation and guidance – all were manifestations of her divine inspiration. She even invented her own language with its own alphabet, a kind of secret code. The creative expression of Hildegard’s inspiration was unbounded.

I feel I have much to learn from the commitment, creativity and courage of Hildegard von Bingen.

(1) This track is titled “Honey and Milk Beneath Her Tongue – Favus Distillans, Dripping Honeycomb,” from Symphony of the Harmony of Celestial Revelations: The Complete Hildegard von Bingen, Volume 1, by Celestial Harmonies, 2011.

(2) Much of my biographical information is from “Hildegard, Von Bingen.” In Encyclopedia of Women’s Autobiography, edited by Victoria Boynton, and Jo Malin. ABC-CLIO, 2005. Retrieved from http://du.idm.oclc.org/loginurl=http://search.credoreference.com/ content/entry/abcwautob/hildegard_von_bingen/0

(3) Additional biographical information is from the excellent series on Hildegard from the Holy Rover blog by Lori Erickson at Patheos.com. To start, see “With Hildegard von Bingen” (January 28, 2014), at http://www.patheos.com/blogs/holyrover/2014/01/28/with-hildegard-in-bingen/

(4) Image is a photograph by Bob Sessions, retrieved from http://www.patheos.com/blogs/holyrover/2014/01/28/with-hildegard-in-bingen/

(5) Image is a photograph by Bob Sessions, retrieved from http://www.patheos.com/blogs/holyrover/2014/01/28/with-hildegard-in-bingen/